The government met its target of offering a vaccine to the most vulnerable by 15 April, and remains on track to offer a first dose to all adults by the end of July.

The milestone comes as government announces that appointments for a second dose of a vaccine will be brought forward from 12 to 8 weeks for the remaining people in the top 9 priority groups yet to receive their second dose.

This is to ensure people across the UK have the strongest possible protection from the virus at an earlier opportunity.

It is part of government’s plans to tackle rising cases of the B1.617.2 variant of concern (VOC) first identified in India, as well as strengthened surge testing, genome sequencing and enhanced contact tracing measures deployed across the North West to control the spread.

Data from Public Health England’s real-world study shows the vaccines are already having a significant impact in the UK, reducing hospitalisations and deaths, saving more than 11,700 lives and preventing 33,000 hospitalisations in England by the end of April.

New PHE analysis shows that individuals who receive a single dose of the Oxford/AstraZeneca vaccine have approximately 80% lower risk of death with COVID-19 compared with unvaccinated individuals. The report also shows protection against death from the Pfizer-BioNTech vaccine rises from approximately 80% after 1 dose to 97% after 2 doses.

ONS data published on 6 May found that more than 9 in 10 (93%) adults reported positive sentiment towards the vaccine.

All vaccines being used in the UK have met the independent Medicines and Healthcare products Regulatory Agency’s (MHRA) strict standards of safety, effectiveness and quality.

Rolling reviews are underway by the MHRA to assess the Janssen and Novavax vaccines.

Approved vaccines are available from thousands of NHS vaccine centres, GP practices and pharmacies. Around 98% of people live within 10 miles of a vaccination centre in England and vaccinations are taking place at sites including mosques, community centres and football stadiums.

Graham Sheen is the BWA Secretary, appointed in 2019. Graham has a strong background in logistics and warehousing, and is very well connected within the warehousing and supply chain sectors.

GXO: Supply chains and the era of automation

GXO: Supply chains and the era of automation 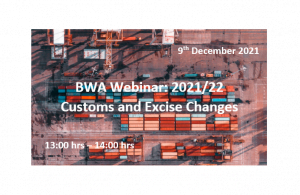